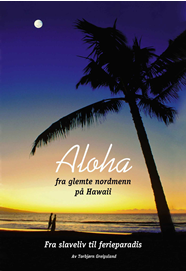 Aloha from Forgotten Norwegians in Hawaii. From Life in Slavery to Life in a Vacation Paradise

The book is sold out, but you can purchase and download today the eBook version of the book in English. This condensed English version includes most of the articles and interviews in the Norwegian book “Aloha, fra glemte nordmenn på Hawaii – fra slaveliv til ferieparadis.” For the Norwegian eBook version, please click here.

Download Aloha from forgotten Norwegian in Hawaii for free in PDF format by clicking here..

Yngve Kvistad in a two-page review in VG (Verdens Gang)

The content of the condensed English eBook version is as following:

– 600 Passengers to Hawaii –  It Never Happened Again
– Nils Emil Aars’ Diary
– Voyage on the “Musca”
– Tough Life in the Sugar Fields
– The Judge Pulled His Gun
– They Achieved Some Improvement  In Retrospect:  Were the Norwegians Deceived?
– The Norwegian pioneer immigrants met a daily life that was quite foreign to them
– Valdemar Knudsen became a pioneer and chieftain on Kauai
– Jeweler in Hawaii
– The Descendants of Hans Peter Faye Operate a Beautiful Vacation Resort on Kauai
– Christian L’Orange – the Captain who became Sugar Plantation Owner and – Tobacco Farmer

– Half Norwegian, Half Hawaiian
– Saddler, Watchmaker, and Sheriff
– Toil and Tragedy, Education and Invention
– He wanted to tell his children about their Norwegian heritage
– Christina-Housekeeper for Caroline L’Orange
– He was not informed of his sister’s death
– Grandfather Johannes worked on the plantation all his life,  but Grandmother Maren was not happy and was always complaining
– Of Norwegian Vikings and Hawaiian Royalty
– Jenna chose the young millwright and Hawaii
– To Kauai without a contract
– Jack M. Johnson has learned Norwegian to be able to read the Diary of his great-grandfather, Nils Emil Aars
– Granddaughter of a Beta passenger marries the son of Captain L’Orange

– New Immigrants Meet the Modern Hawaii
– Masters of Song and Music
– Miss Aloha Hula is Norwegian!
– Sonja – Queen of the Waves
– He’s lived nearly all his life in Hawaii –  but he still speaks Norwegian like a native
– When we are away, we miss the Hawaiians!
– Audun Davik Knows Hawaii In and Out
– The Shock of a Lifetime that Ended in a Wonderful Trip to Norway
– 50 Years on Wings
– Erik, with ancestors from Kalveland and Svineli, teaches his students about calves and swine
– Plans to Cultivate Orchids
– World Class Writer
– Evjen in Orkanger became Iverson in Hawaii
– They teach students to help others
– Important experience made Hawaii dear to their hearts
– Raincoat? I don’t even own one!
– Similarities between Norwegians and Hawaiians: They are not pretentious
– Nina Fasi – Hawaii’s Norwegian Consul
– Preserving an Important Legacy
– Post word by Knut Vollebæk, Norwegian Ambassador to the United States of America, former Norwegian Secretary of State.

This website uses cookies to improve your experience while you navigate through the website. Out of these, the cookies that are categorized as necessary are stored on your browser as they are essential for the working of basic functionalities of the website. We also use third-party cookies that help us analyze and understand how you use this website. These cookies will be stored in your browser only with your consent. You also have the option to opt-out of these cookies. But opting out of some of these cookies may affect your browsing experience.
Necessary Always Enabled

Any cookies that may not be particularly necessary for the website to function and is used specifically to collect user personal data via analytics, ads, other embedded contents are termed as non-necessary cookies. It is mandatory to procure user consent prior to running these cookies on your website.