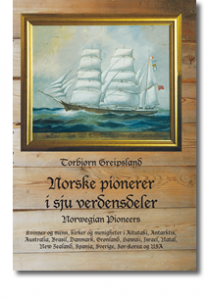 Norwegian Pioneers in the Seven Regions of the World

Text is in both English and Norwegian.

Norwegian Pioneers in the Seven Regions of the World is now available to purchase as an iBook here for only US$9.99

Nearly everyone in Norway has either close or distant relatives who have emigrated to foreign countries. Many of us like to read about these emigrants. This book gives you some very interesting and exciting stories about Norwegian men and women in 15 countries around the world. Perhaps you will find your own relatives? This book is well worth reading.

In the Norwegian State Department magazine, UD-posten nr 4 – 2010, Einar Tallaksen writes a review of the book “Norske pionerer i sju verdensdeler. Norwegian Pioneers” and calls it a “thorough work.”

Minister of the Environment and International Development Erik Solheim has launched a project named “Religion and Development” with the goal of “learning more about the role of religion in Norway’s cooperation with poor countries.” With this in mind, Tallaksen concludes that parts of this book should be considered as “obligatory reading.” (Translated from Norwegian)

The bulletin reprints a couple of pages from the article “Heard the Gospel in the Death Camp at Andersonville”, and article the archivist considers particularly interesting with the coming 150th anniversary of the commencement of the Civil War in April 2011.

Former president Telelaget in USA, Elaine Nordlie: ”very interesting reading! I am very impressed with the book….I am learning so much and enjoying the fascinating stories. Most of the information is all new for me.”

Norwegian Pioneers in the Seven Regions of the World is now available to purchase as an iBook for only US$9.99

This website uses cookies to improve your experience while you navigate through the website. Out of these, the cookies that are categorized as necessary are stored on your browser as they are essential for the working of basic functionalities of the website. We also use third-party cookies that help us analyze and understand how you use this website. These cookies will be stored in your browser only with your consent. You also have the option to opt-out of these cookies. But opting out of some of these cookies may affect your browsing experience.
Necessary Always Enabled
Necessary cookies are absolutely essential for the website to function properly. This category only includes cookies that ensures basic functionalities and security features of the website. These cookies do not store any personal information.
Non-necessary
Any cookies that may not be particularly necessary for the website to function and is used specifically to collect user personal data via analytics, ads, other embedded contents are termed as non-necessary cookies. It is mandatory to procure user consent prior to running these cookies on your website.
SAVE & ACCEPT