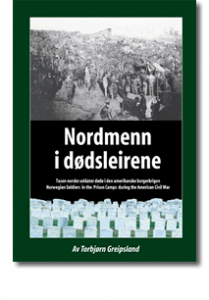 Norwegian Soldiers in the Prison Camps – during the American Civil War

“This book is the most extensive compilation of the stories from and facts about  Norwegian soldiers in Civil War prison camps….enriched by Greipsland’s analyzations.”

The number of Norwegian men living in the United States during the Civil War is estimated to be between 25,000 and 35,000.

From this, one can draw the obvious conclusion that around every 5th Norwegian man living in the USA participated in the Civil War. This will also suggest that nearly every family was affected, if not directly involved.

A son, a brother, a husband was away for several years fighting as a soldier during the time that the family was getting established in their new country. One can only begin to fathom the effect that this had upon careers and social life.

About a thousand of these soldiers and officers did not come home alive. The widow was left alone with her children, and in some cases, many children. Others came home with serious injuries, some had been crippled, others had internal injuries that never healed. Many of these died during those first difficult years after the war.

There is little doubt that the slaughter of soldiers that characterized this war also caused much life-long psychological trauma, even though this was not documented at that time as it would have been today. The sorrow and problems resulting from these trying times cannot be measured, but they can, and must, be mentioned. The immigrants had perhaps been given the worst possible start to life in their new country. The dream had become a nightmare.

The Norwegian prison camps from World War II, as well as the German concentration camps have been given well-deserved attention in books and films. The Civil War Prison Camps in USA have been neglected in the more recent mainstream books about the Norwegian America. In the Civil War prison camps the prisoners were not forced to do heavy labor, but they died anyway. These prisoners died of starvation and sickness, they were shot to death without trial, or tortured to death.

In books and on the net, one can read many attempts to try to rationalize the atrocities in the camps, whether they belonged to the Union army in the North, or to the Confederate forces in the South. Everything from general food shortages to bad transport conditions is mentioned. However, the facts reveal that available help was deliberately withheld from the prisoners. It is just not possible to truthfully justify any of the active torture practiced in prison camps of the South or the North. These were deliberate actions, just as similar brutality has been wrought in wars before and after. Perhaps a couple of hundred Norwegian soldiers died in the prison camps. Nearly a hundred died in Andersonville alone. Because these prison camps are not given proper attention in the more recent mainstream literature about Norwegians in America, this book seeks to find the truth concerning this subject.

This website uses cookies to improve your experience while you navigate through the website. Out of these, the cookies that are categorized as necessary are stored on your browser as they are essential for the working of basic functionalities of the website. We also use third-party cookies that help us analyze and understand how you use this website. These cookies will be stored in your browser only with your consent. You also have the option to opt-out of these cookies. But opting out of some of these cookies may affect your browsing experience.
Necessary Always Enabled

Any cookies that may not be particularly necessary for the website to function and is used specifically to collect user personal data via analytics, ads, other embedded contents are termed as non-necessary cookies. It is mandatory to procure user consent prior to running these cookies on your website.